Hello! I have this tutorial on the Elizabeth Craft Designs blog today, for a card idea I've wanted to try for a while - an exploding box card with a Pop Stand feature in the middle. I decided to use Karen Burniston's lovely new Christmas Trees Pop Stand, which has a beautiful floating centre.

Directions for making the card:

It's been my first chance to use my new Martha Stewart Score Board, which I found lovely and easy to use! 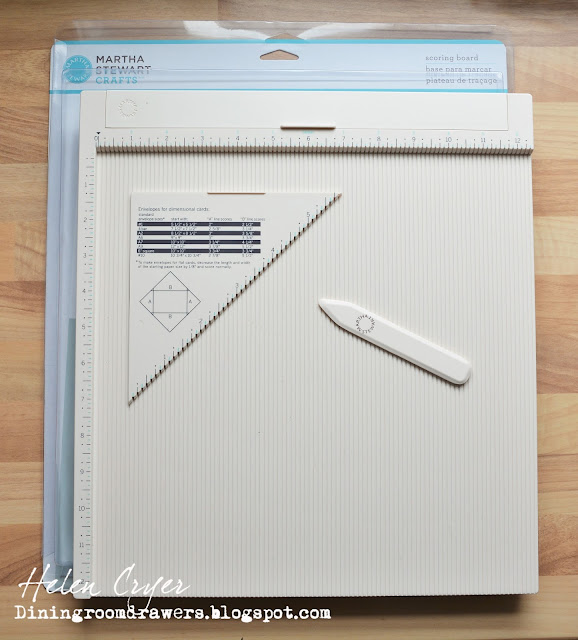 2. Cut away the four corner squares. Fold under the two outer side squares (so that the card base can fit through a die cutting machine). Die cut the small pop stand tabs into the middle of the centre square. (This will also die cut the two folded-under side squares, but these die cuts will get covered up later.) Open out the card base again, so that it looks as below.

5. Use the pieces shown in step 4 to decorate the four internal sides of the exploding card, as shown below. Adhere the trees with foam pads, and glue some silver tinsel to the trees. Adhere the stars, including two back-to-back at the top of the 3D tree. Glue a small amount of tinsel to either side of the 3D tree's stars.

6. Use a stamp from the Merry and Bright Clear Stamp set on cream card. Layer it onto red patterned paper. Cut two banner ends from silver glitter card stock, and stick everything to the card base as shown below.

7. To make the lid, cut a 6'' x 6'' square, and score it 7/8'' in from all four sides. Snip one side of each of the four little corner squares, to make tabs. Glue these tabs behind the long rectangles, to made the sides of the lid.

8. Cut two 3'' x 3'' squares and adhere one to the bottom of the box (to cover over the pop stand holes), and the other to the lid. Cut another tree and star, and add to the lid, along with some more tinsel.

9. Finally, cut four 2'' x 3'' rectangles of patterned paper, and adhere them to the box sides. Die cut an assortment of silver glitter card stock stars (from the All Seasons Tree die set and the Spiral Circle Pull Card die set), and use them to decorate the box sides.

The lid holds the sides of the box in place, and when the lid is removed, the sides fall open to reveal the trees inside. I hope you've enjoyed this tutorial, and perhaps come up with some other versions of exploding box Pop Stand cards! 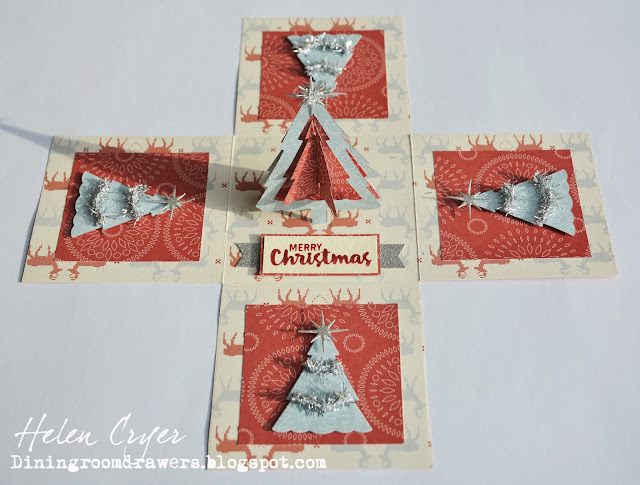 The Christmas Trees Pop Stand die set is one of the new die sets and stamp set from Karen Burniston's 'Merry & Bright' Collection... so much fun! 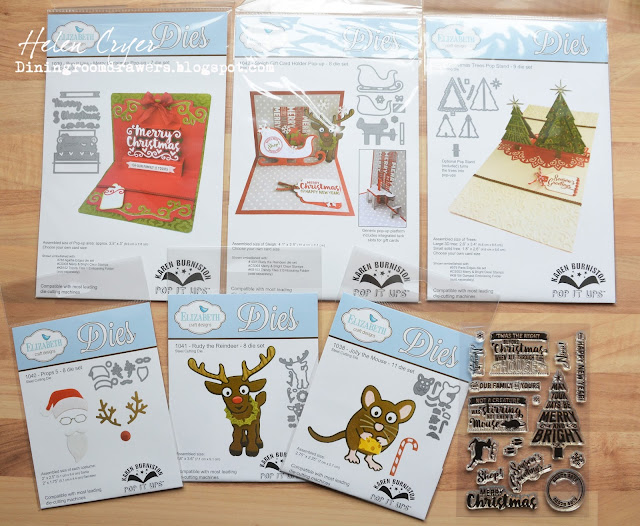