I have a new favourite die! - the Card in a Box from Sizzix - it's really quick to put together, and includes the layer pieces, and inner divider pieces too (plus clouds, banner and windmills!)
For this version, I added floral papers from First Edition's Floral Pavilion pad, then on one of the flaps I added a Spellbinders frame die, and layered it with banners from the new Sizzix Alphabet Banners set. 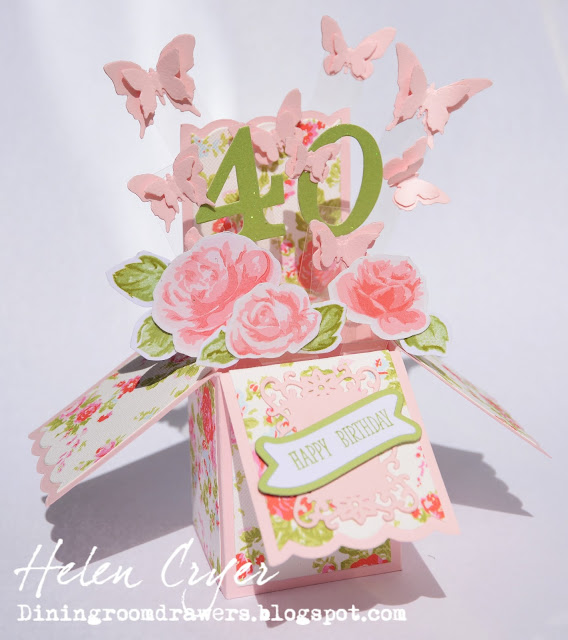 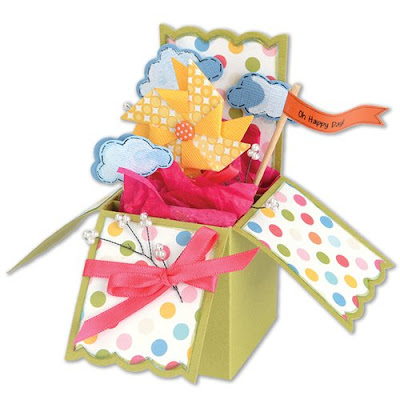 To decorate the box, I added a glitter card '40' (cut with a Stampin' Up Sizzix Alphabet die set), which I glued to acetate, and attached to one of the inner dividers with tape runner.
I used Altenew 'Vintage Roses' stamps, hand cut them out, and attached them on acetate strips too.
Finally, I also added the Tim Holtz butterflies on acetate strips. 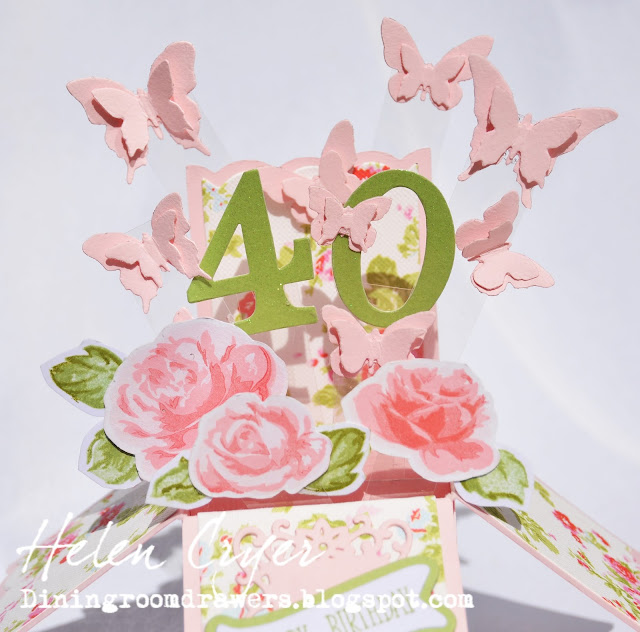 This picture shows the inner dividers better. It's actually quite a simple card, but I think it looks effective. 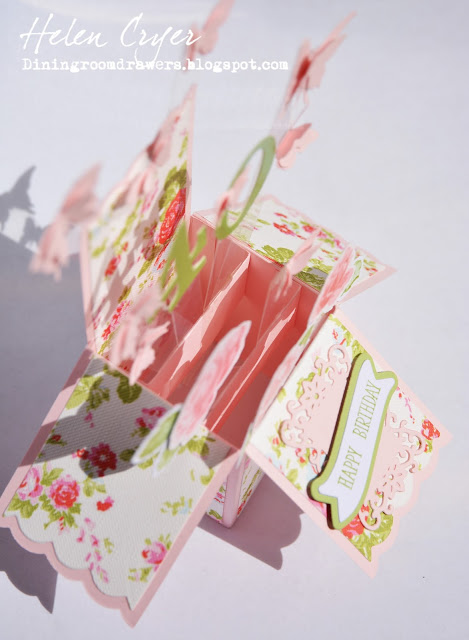 I absolutely love the new 'Alphabet Banners' Die and Stamps set from Sizzix - I like how each of the banners has little holes for twine, plus a perfect shadow die too.
For this card I stamped the letters (from the stamp set which comes in the package) with VersaMark ink, and heat embossed white embossing powder.
The clouds are from the Hello Sunshine Triplits set, also from Sizzix. 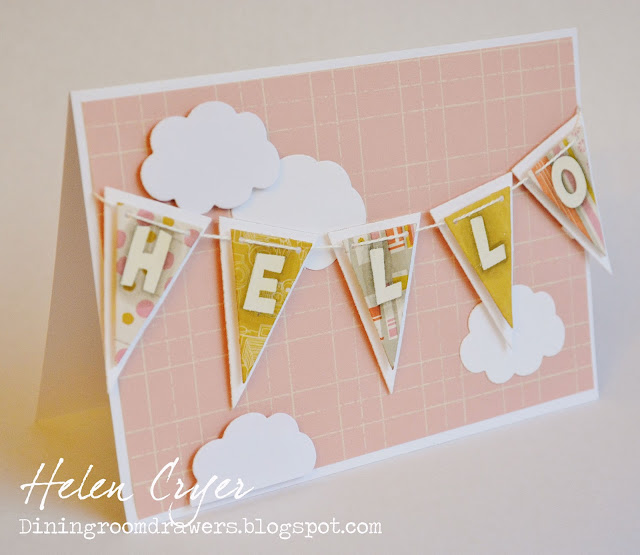 This card uses the Regal Flip-its die set, along with gorgeous little flowers from the Sizzix Friends Forever Step-ups Card die set, and a tag and stamp from Sizzix's new Framelits Die and Clear Acrylic Stamp Set - Tags and Words. 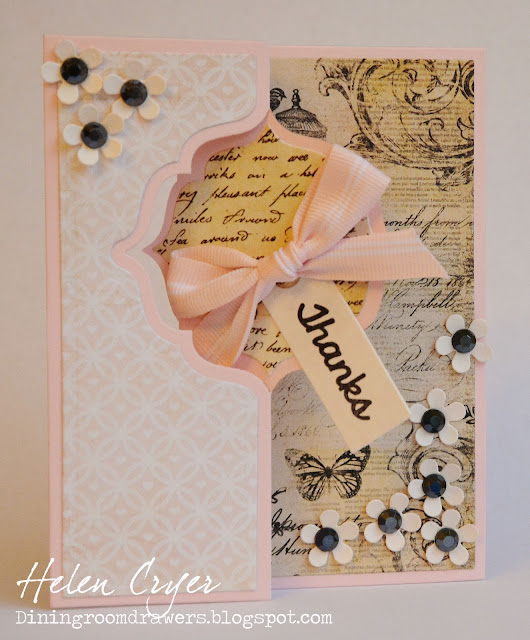 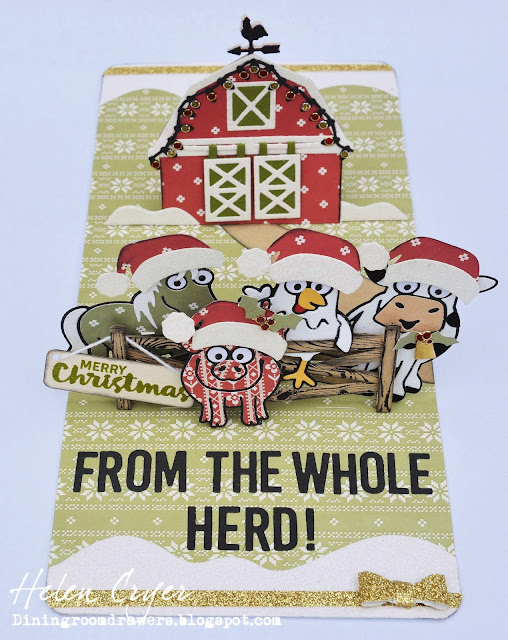 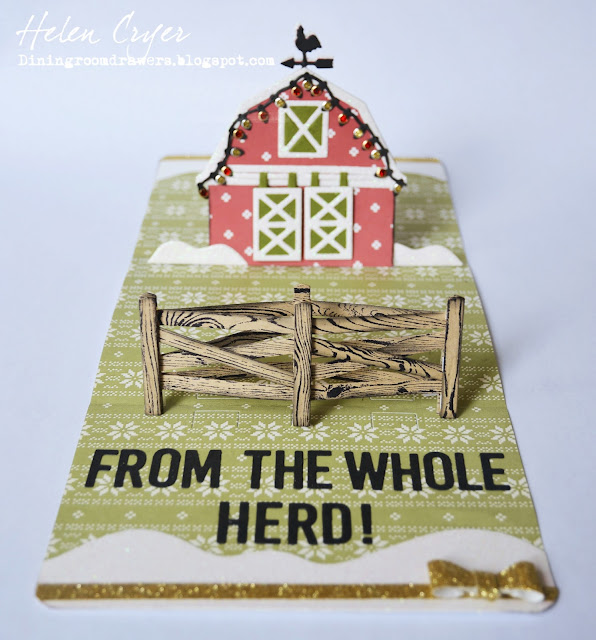 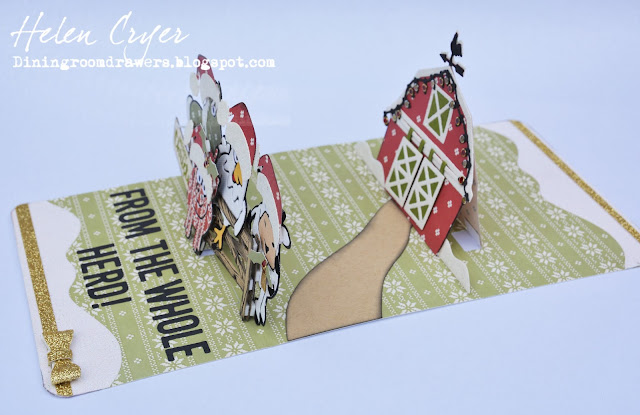 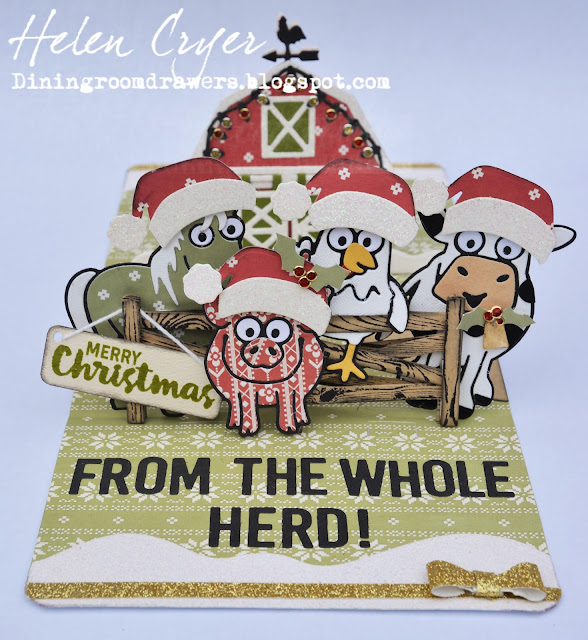 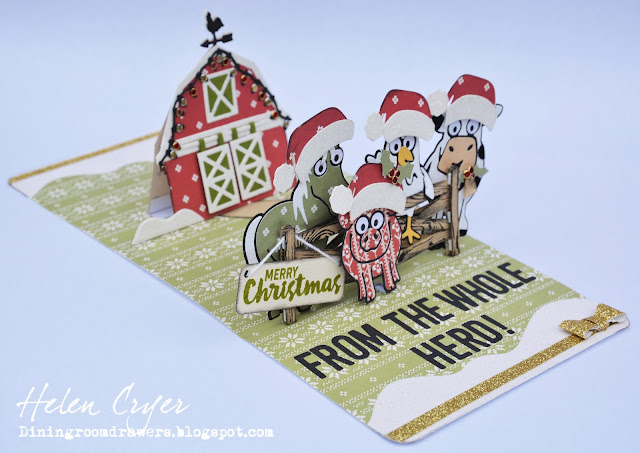 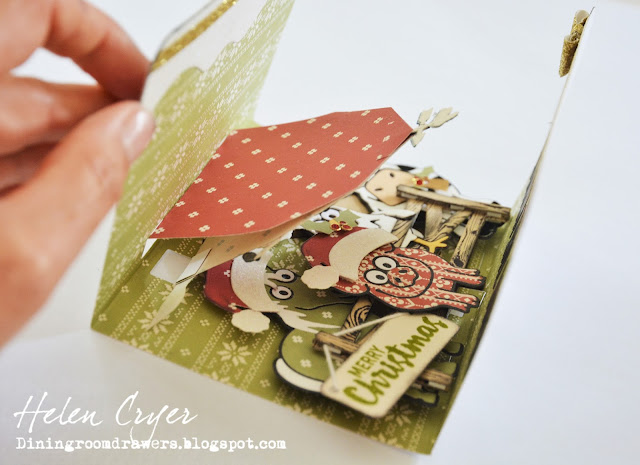 Just a nice simple Pop It Ups Pivot card today, with stamps from Purple Onion Designs.
I used the Katie Label Pivot Card die with thick patterned cardstock, and used the same die set to cut the layers on the pivoting parts. 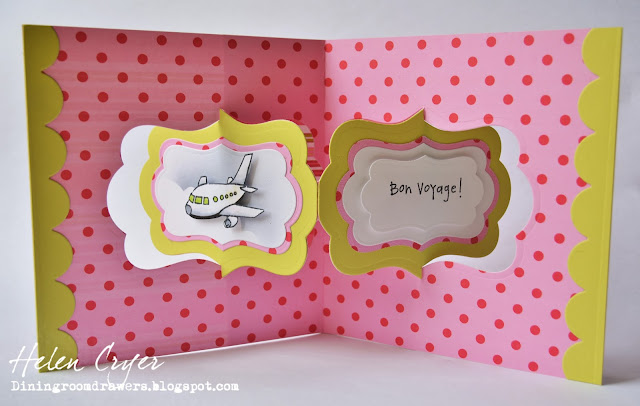 I coloured the stamped image with Copics, and cut it out by hand, then used some stamping mask paper to cut out a clouds outline, and airbrushed grey Copic marker for the sky.
I stuck on the plane with foam pads, and added some extra cardstock to the outside of the card to cover over the gap left by the pivoting parts. 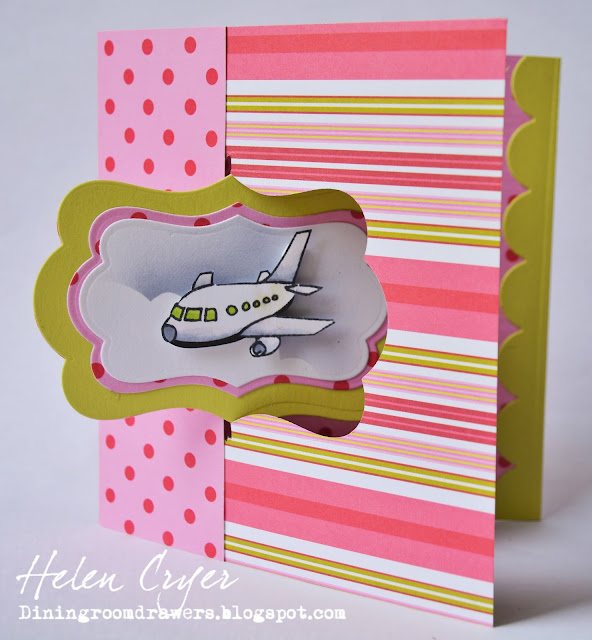 I have a couple of cards to share today which I made using some of Stephanie Barnard's latest die releases for Sizzix. 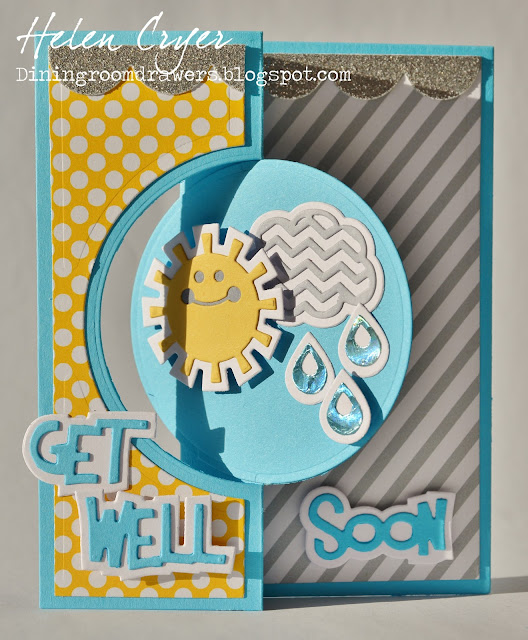 My second card uses the sun and clouds from the Hello Sunshine Triplets set, with words and bird from the Spring Birds Triplets set.
The heart background is from the Sizzix Framelits 'Card with Lovely Sentiments Drop-ins' die set. 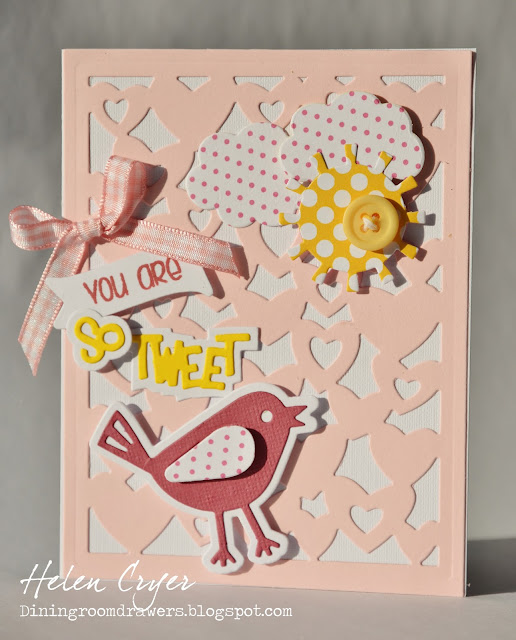 I love this combination of Purple Onion Design stamps on a Pop It Ups Circle Accordion card!
I mainly used My Mind's Eye 'Sky's the Limit' papers.

For the first panel, I stamped the heart bunting, and fussy cut patterned paper, sticking the hearts on with small foam pads.

For the second panel, I stamped the image on patterned paper, cut it out and stuck it on with small foam pads. I used the Copic spraypaint system to add some shadow first. 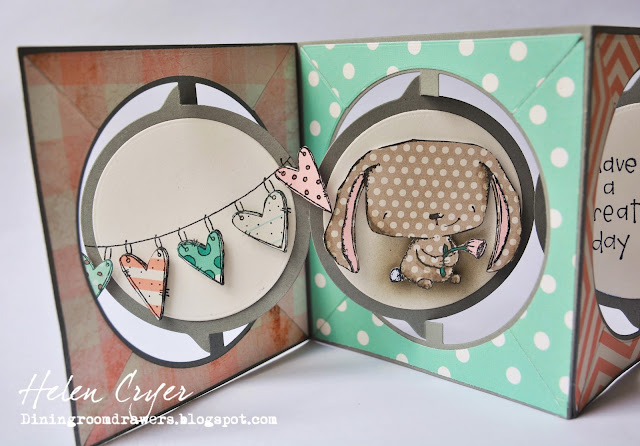 I used the same techniques for the third and fourth panels. 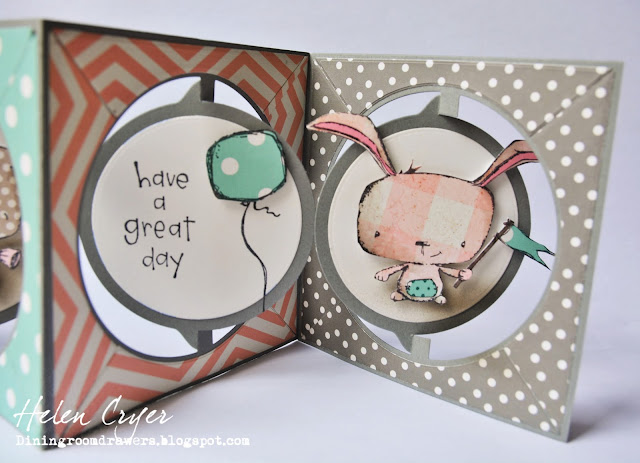 I used the Pop It Ups Rectangle Pull Card to cut a pale pink card base, and used the die again for a patterned paper layer, which I trimmed down to fit.
I used rectangle dies from the Accordion Rectangle die set to create the orange and white layers for the card front, and for inside the card.
The stamps are from this set from Purple Onion Designs. 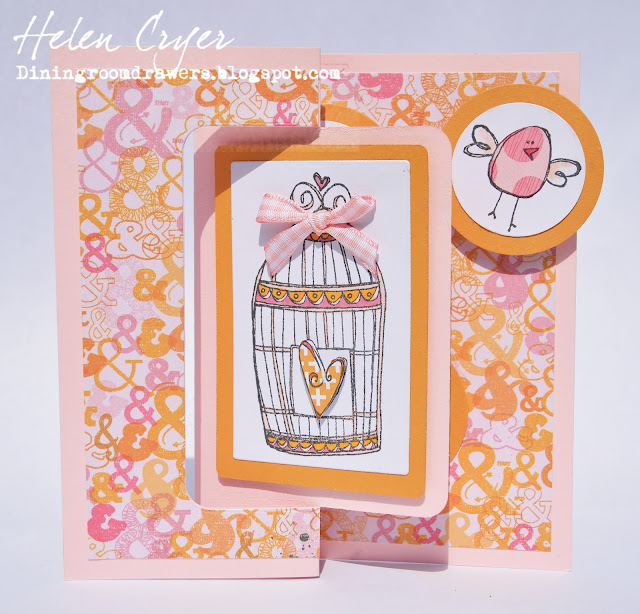 I used circle punches for the backgrounds for the birds and attached one of them to the pivot piece from the die set, so that it 'flies' a bit when the card opens. 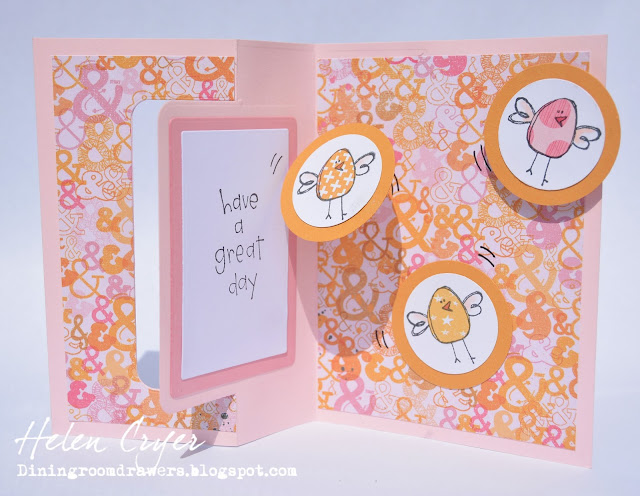 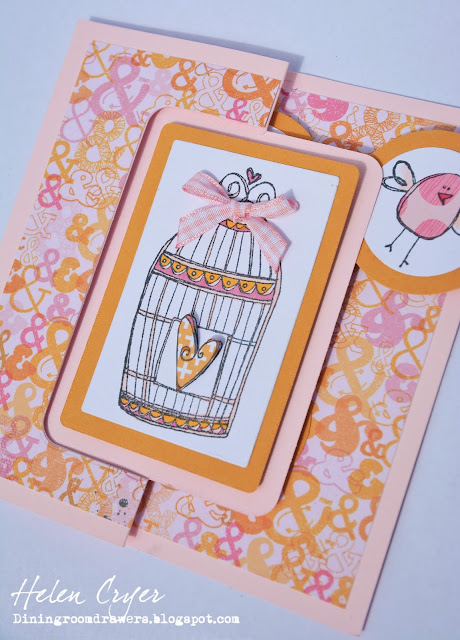 Helen
I've been married to Scott for 22 years, am mum to 4 great kids, including one with Type 1 Diabetes. I'm also an On-Call Fire Fighter. I love making things with the craft supplies which are crammed into the drawers in my dining room...