40th Birthday Card for my Husband

It's my husband's 40th Birthday on Sunday, and this is the card I came up with for him.
(He's actually Vice Principal of a college now, but his background is accountancy and numbers, so hopefully he appreciates the humour!) 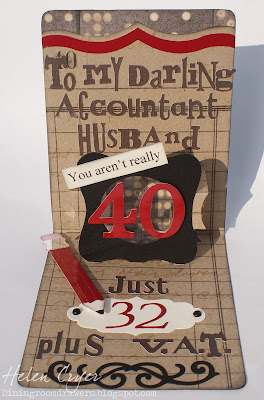 Oh gosh. I used lots of dies for this:
Pop 'n Cuts Base, with Label insert,
Movers & Shapers Star and Circle Set (to cut out a window in the pop-out part, which I stuck acetate sheeting behind),
On the Edge Brackets (I used this to make the red strip at the top too),
Tim Holtz Alterations Alphabetical,
Stampin' Up/Sizzix Bigz Alphabet Typeset (for the 40),
Cuttlebug Olivia Alphabet (for the 32),
Sizzlits Phrase, Smile w/Frame,
Sizzlits Phrase, For You w/Swirls,
and my old red Sizzix School Supplies die, for the pencil.
I used Tim Holtz Idea-ology Kraft Resist pad for the ledger paper and K&Co Cut n Paste for the domino/numbers paper. 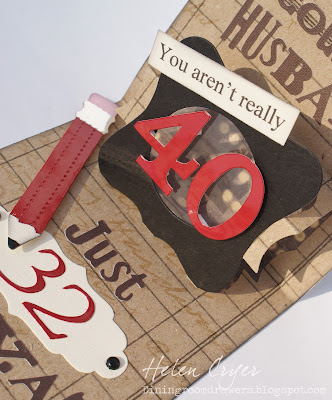 The card front. (I liked how 40 was one of the numbers on the other side of the cardstock! I used two Nestabilities dies to make the shiny red frame, to pick it out, plus used Sizzix Ancient Documents die, Label & Flourish Sizzlit (from the Love Set), and Stampin' Up Hearts punch and Scalloped Border punch. 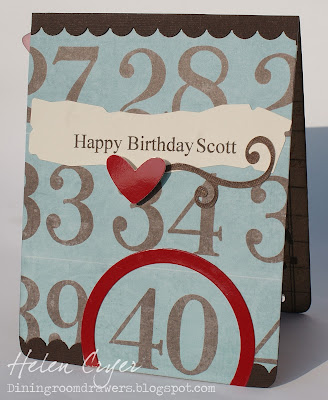